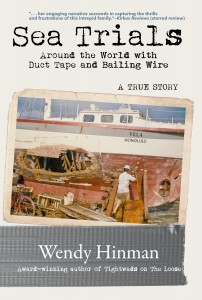 Sea Trials: Around the World With Duct Tape and Bailing Wire by Wendy Hinman

1. What drew you into the story and kept you reading? Was it the characters or the drama of the story? What most fascinated you about this story? What aspect most frightened you?

2. Which character could you most relate to in the story? Least?

3. What do you think was the most challenging aspect of their journey? Would you have kept going? At what point would you have been tempted to give up on this dream?

4. Have you ever had a goal you pursued obsessively while everyone around you thought you were crazy? Has anyone close to you ever been driven to reach a goal? Have you ever bought into someone else’s goal and regretted it later?

5. What do you think of taking kids on a voyage like this? Do you think the parents were irresponsible? Or did they expose their children to a unique educational opportunity?

6. How did the relationships between family members evolve during the journey, and how did that affect the outcome? What do you think each character takes from the journey?

7. What was your reaction when the family completed their epic voyage against-all-odds? Do you think the costs were worth the effort?

8. Who do you think is the real hero of the story? What makes him/her a hero?

9. Could this story happen in an era of instant communication and modern navigation? Have we lost some of our sense of adventure and self-sufficiency with the development of technology?

10. Consider the contrast between the freedom of the open ocean and the limitations of the cramped quarters and the family’s resources. In a sense, the family’s world is broadened and narrowed at the same time. How does this affect their outlook? What observations can you make about the opportunity to explore the world and its many cultures first-hand and doing so within the confines of doing it slowly under sail with limited resources?

11. Do you think it was inevitable that Dawn would leave Chuck? Do you see a recognition of her abilities as leading to her decision?

12. During the course of the journey, life is boiled down into its most basic elements for survival, both mental and physical. Does it affect the way you see the world and privilege?

13. What did you take away from this story?