Which Anchor to Choose? An investigation.

Which anchor to choose? Here’s an article I wrote about someone who tested our anchor along with many others in a variety of conditions and what he discovered. Thanks to Steve Goodwin.

Experienced cruisers work with a local resource who analyzes anchor performance to consider anchor options for their new boat.

This article originally appeared in the May 2022 issue of 48° North.

Choosing the right anchor is a decision that can perplex even the savviest boat owner. A good anchor offers immense peace of mind and can save our boats from ruin. We count on this essential piece of equipment to ensure that our boat will remain in place while we sleep, and that it will be where we left it when we return from an expedition ashore, under water, or out in the dinghy.

Aboard our 8,000-pound 31-foot Tom Wylie sailboat, Velella, we carried a 17-pound, aluminum Spade anchor. Because ours was a light, small boat, we didn’t want to carry too much weight on the bow, yet we wanted an anchor that would be secure in a wide range of conditions during a multi-year offshore voyage. It was our home, after all — small and modest as it was. We also were counting on the 240 feet of 5/16-inch chain that rested farther aft to keep us safe. My husband Garth had read about the Spade’s impressive performance for its weight in Practical Sailor, though the anchor wasn’t widely distributed at the time. In 1999, we ordered one from the manufacturer in Tunisia, hoping for the best. It arrived without incident and turned out to be a good investment.

That 17-pound Spade anchor kept our little sailboat safe over most of the 14 years we owned her. We subjected Velella and her anchor to many intense situations during our seven-year circumnavigation of the Pacific, including storms, typhoons, waves, and docks that threatened to turn our home into kindling. We never dragged anchor over muddy, coral-strewn, rocky, or sandy bottoms. Several years into the voyage, while we were in Fiji in 2003, we noticed some welding cracks on the Spade’s shank. Garth corresponded with the French manufacturer in Tunisia to get advice about re-welding the shank, so we could solve the problem in our remote location. The company immediately sent us a new anchor and it arrived quickly to Musket Cove, a resort and yachting center in Fiji. The new anchor (and the re-welded original we kept for a spare) held us throughout the rest of our 34,000-mile voyage and beyond. We certainly put the Spade to the test.

We’ve since sold our beloved Velella and are currently building a new 38-foot world cruiser designed by Garth (a naval architect) in our backyard workshop on Bainbridge Island. We hope to enjoy many more adventures aboard a larger, 14,000-pound boat. Though our new boat is not yet finished — and, no, we cannot predict exactly when it will splash — we are again considering which anchors will best suit our needs.

Happy with the Spade’s performance, over the last few years we purchased a couple more. We bought a larger Spade anchor (a 41-pound A140 for hurricane use) at a swap meet and a 26-pound A100 for kedging and to use as a spare. But we also still plan to buy another anchor or two. We consider anchors to be cheap and reliable insurance for protecting an important asset — especially one that is likely to be our future home. Because of our previous experience, we realize that an aluminum Spade may not last our entire trip, plus we know a number of people who have lost anchors in various ways during their voyages.

Steve Goodwin discusses the A100 in his video about testing it: #116.

In search of data to help us make a decision, Garth hunted and pecked his way through the internet. In the course of his explorations, he came across Steve Goodwin of SV Panope, who has embarked on an impressive anchor testing regimen. Intrigued, Garth watched many of his YouTube videos and perused the data he’s produced citing the anchors he’s tested, the type of bottom, and pressure he’s subjected them to.

Here’s what we learned. (MORE) 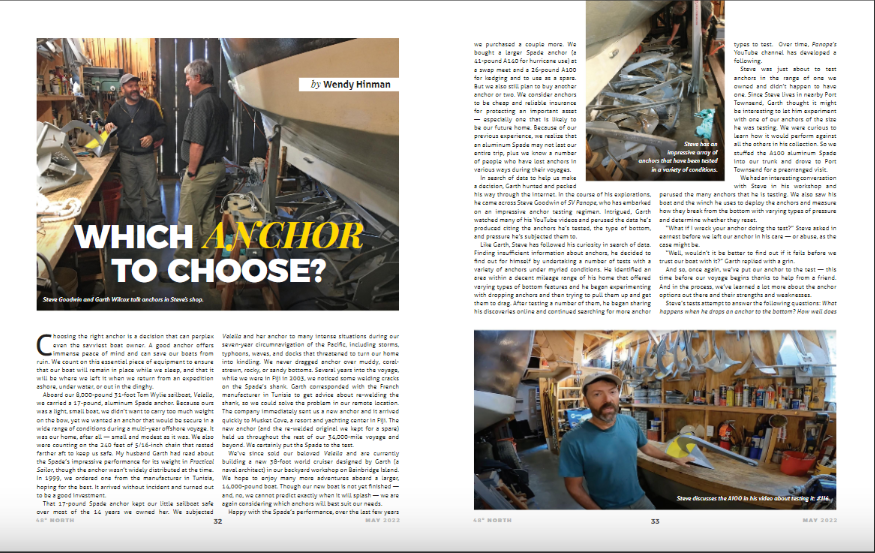 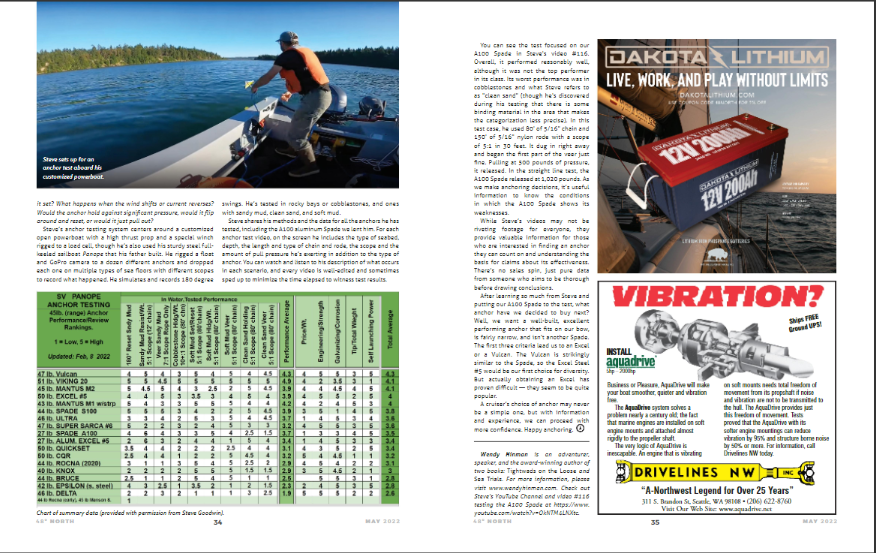 This entry was posted in Boating, Media Coverage, Writing. Bookmark the permalink.