“Riveting. Sea Trials is impossible to put down until the nail-biting end.” Cruising World Magazine 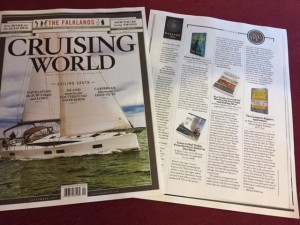 “In 1973, a San Francisco family departed on a planned four-year round-the-world voyage. The Wilcox crew—Chuck; his wife, Dawn; their kids, Garth, 13 and Linda, 10—set sail with varying degrees of enthusiasm (at a time when world cruising was uncommon and offshore navigation was celestial) to fulfill what was primarily Chuck’s lifelong dream. The book’s title hints at what’s to come. With significant textbook preparation and training but not offshore or shakedown cruising aboard their 40-foot wood Maine Pinky, Vela, the voyage itself becomes a series of sea trials. There are pleasures and many pitfalls, including a near-disastrous shipwreck on a Pacific reef and the painstaking salvage and repair of Vela in a remote port.

The author, an experienced sailor who is married to the now-adult Garth, tells this riveting tale with objective skill and restraint in terms of both shifting family dynamics as the cruise progresses and what might (or should) have been done differently. Even as the family builds seamanship skills, readers will likely find themselves bracing (or judging) what comes next, yet it’s impossible not to care about them and the outcome. This tale of a circumnavigation that ultimately took five years, completed against all odds, is full or real-life drama and “lessons learned” – a feat of perseverance fueled by determination. It is impossible to put down until the nail-biting end.”

This entry was posted in Boating, Reviews, Uncategorized, Writing. Bookmark the permalink.